Mass Fiscal Alliance
lied about and distorted my voting record

Please 'share the following facts about my voting record, and write a 'letter to the editor' at opinion@thesunchronicle.com about my votes on the actual issues. These votes have been on the home page of my website all along.


They have intentionally distorted my record and the amendments and bills in an attack mailing they sent to voters across the Commonwealth in districts where 20 Democrats have tough reelection races.

Here are the FACTS in more detail

1) I did not vote against local aid! I voted for increasing local aid by $25 million; I voted against debating increasing it by $75 million because that would have cut into state police, homeless services, mental health services, other critical services that the state provides to our community in an economy of scale that our municipality cannot provide. I voted to increase local aid by $25 million! (Roll Call #300).

AMAZING ... Republicans voted AGAINST the extra $25 million Roll Call #327, after they voted for it! Roll Call #300, H3951) Mass Fiscal Alliance ignored the record of Republicans flip-flopping on the issue of local aid. They were for $25 million before they were against it!

Roll call 113 was a vote on the FY 14 budget! It was not a vote for or against the gas tax increase or index the gas tax to inflation!!!

Once again, Mass Fiscal Alliance LIED about my record.

3) Yes, I voted to implement the Affordable Care Act in Massachusetts; we are going to get reimbursed an estimated 90 cents on the dollar from the federal government. Why would I ever want that money to go to other states?

Once again, Mass Fiscal Alliance LIED about my record.

Furthermore, the picture they used of me in the attack mailing was me at a veterans' event with Veterans Agent Sgt Seth A. Bai in September 2013 at a veterans event! But they cut out the Marine veteran, Sgt Bai (SEE BELOW)! The nerve of this partisan hack group!

If you find Mass Fiscal Alliance's blatant distortions reprehensible, please send them an email at info@massfiscal.org and call them at (617) 553-4115. 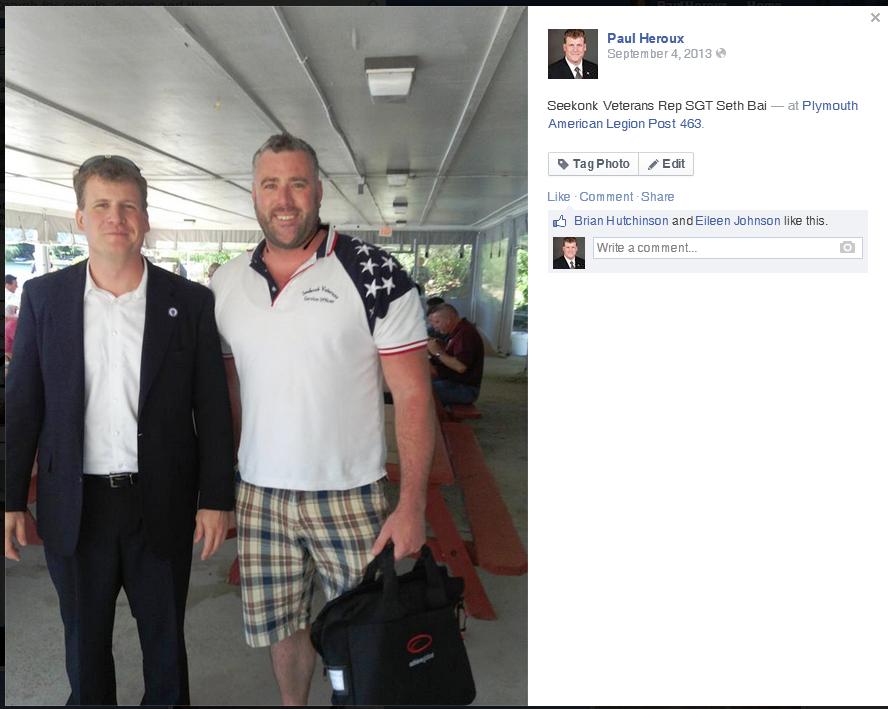