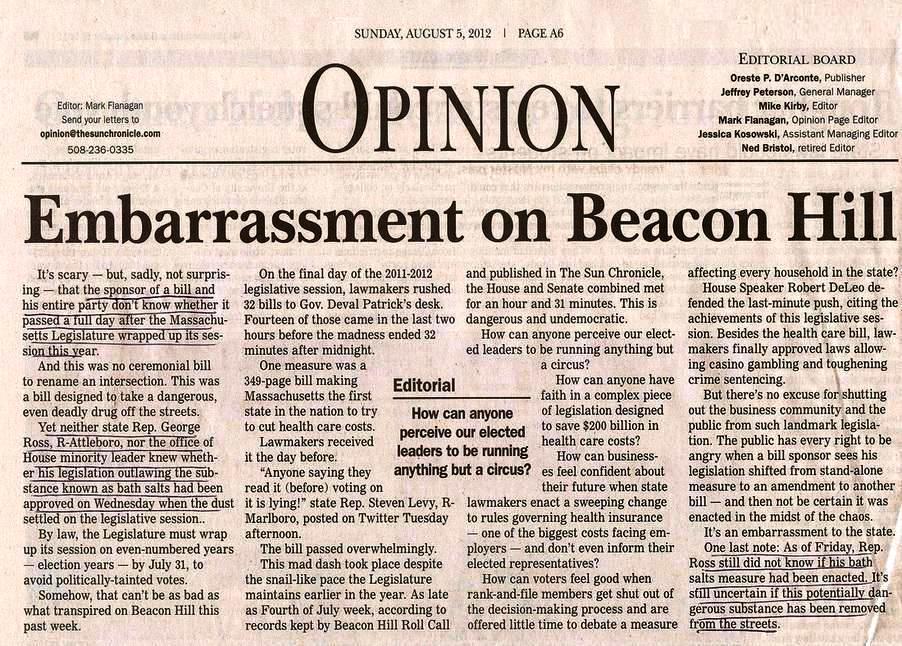 State Rep candidate Paul Heroux says if a vote took place at the statehouse on an amendment that I sponsored, I would not have left the chamber without knowing whether it passed or failed.

State Rep candidate Paul Heroux said that there is no excuse for Rep. George Ross not knowing the outcome of the vote on his amendment to ban bath salts. During the voting, the House of Representatives Clerk sits to the right of the rostrum, where he records all votes instantly, and is available to any State Representative to affirm whether a vote passed or failed. It is not the Republican or Democratic leader that records votes. He can also print out results of who voted yea or nay on roll call vote. All Rep. Ross needed to do was make the effort to inquire about the outcome of the measure. It is either a work ethic or competence issue.

Ross could also inquire of the chairman of the committee that brought the measure out of committee.

Before Rep. Ross entered the chamber, he should have known what vote his bath salt amendment was in, and been paying attention when the vote came up, which is standard practice. Since he gave his maiden speech on the measure, disturbingly only days before the end of Ross’s second legislative session, the vote probably came up shortly after his speech.

“Attleboro residents depend on their state reps to understand what they are voting on, as the impact of votes could have a great impact on education, public safety, or other important impacts to our community. If elected, I will make sure I understand what I’m voting on, and how the votes come out on items that could impact our community”, said Heroux.
Embarrassment on Beacon Hill